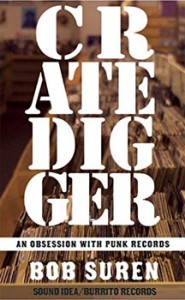 Extrait: « I spent 30 years of my life consumed by punk rock music. At first I was just a listner but quickly got caught up in the excitement of it all. I began playing in bands, writing about music, and shooting photos. I published my own magazine and edited another. I hosted 35 record conventions. I ran the Burrito Records label and Sound Idea, a record distribution and store, for eighteen, sixteen and fourteen years, respectively. I contributed to four books. I had a syndicated Internet radio show. I had a bootleg music merchandising empire. I promoted more than 600 concerts and traveled all over with my own music. »

Extrait: « When I opened my record store in 1995, one of the labels I was most excited to carry was SST Records, home of Black Flag, Descendents, Bad Brains, Hüsker Dü, and many other primordial greats. SST was built on direct-to-store sales and was the prime example for many independent labels and a major middle finger to the mainstream music business. For a few years I bought directly from SST. (…) On Monday, I called to make my order and the guy was canned. In fact, the entire sales department was canned. I was told by someone on the phone that SST no longer dealt direct to stores and that I would have to buy SST product from my choice of three large distributors. (…) I protested. I called SST and asked them to continue dealing direct with me. I asked them to reconsider the whole thing. It seemed incongruent with their history and ideals. »

Extrait: « Sam and Pete are brothers who worked at my record store. (…) If I had known about Sam’s inability to do anything in a timely manner, I probably never would have called him. But I didn’t know. And by the time I figured it out, it felt like I was stuck with that loveable goofball. (…) Also around this time, Pete started working at the shop. Pete was a great worker when he could get to the shop, but the thing is, Pete never learned how to drive. (…) I remember one time Sam and Pete got into a fight in the parking lot. It was basically a bunch of name-calling and wild swings. Sam broke one of his fingers on Pete’s head and didn’t get it set. It healed crooked, like an old witch’s finger. »

Extrait: « Jason was from Miami. He was a year older than the rest of us and cooler. He knew stuff we didn’t know about. (…) Jason knew about the Gay Cowboys in Bondage. I think he saw them in Fort Lauderdale. Gay Cowboys were supposed to headline the first show I ever went to but they canceled at the last minute. I never got to see them. Jason had the Gay Cowboys demo tape and the record. We all got dubbed copies. This was a staple of our crew’s soundtrack for a few years. Gay Cowboys blasted in all of our bedrooms and in all of our first cars. »

Extrait: « I heard a few songs on a compilation by a mystery band from Tallahassee named Hated Youth that piqued my interest for years. Who were these guys, and what else did they do? I wrote an online article about Florida punk rock that asked these very questions. One day, the answers walked through the front door of my record store. A Hated Youth song had appeared on an unauthorized compilation album from Europe. Just a few days after I ran out of copies in the shop, a guy walked in asking for it. I told him I sold out and didn’t think I could get more. The guy really needed a copy. He introduced himself as Gary Strickland, the singer of Hated Youth. (…) Which led me to my next question for Gary: Did Hated Youth have any unheard recordings? Yes he said, as he handed me a very old cassette tape from his pocket. Hated Youth’s complete 1983 recordingd, thirteen songs in all. (…) Belligerent outbursts ripped from the speakers, escaping from the tape that held them captive for nearly two decades. This sort of rage is timeless. The world needed to hear this. »

Extrait: « I had been listening to punk rock for less than a year when a guy in my neighborhood let me borrow the first MDC album. It was a shock. Mayber unnerving is the right word. (…) The lyrics pummeled me. It seemed like Dave Dictor was yelling right in my face, and hessemed so sure of what he was yelling. The lyric that espacially unnerved me was « And there’s no God in heaven, so get off your knees ». My parents raised me Catholic. I was young and sheltered; I thought everyone believed in God. What was this? A brain bomb. »

Extrait: « New Minor Threat? We had not heard it, but it was Minor Threat and it was new, so please crank that fucker, Dave Rat. Of course by the time the « new » Minor Threat made it to our small town, it was probably a year and a half old. The music circulated slower then. It was harder to find and people appreciated it more. Scorinf a great record was cause for celebration and that great record inevitably was dubbed for everyone in the crowd. For the past year or so, I had been blasting the shit out of the first two Minor Threat 7″s. The first time I heard the opening barre chord to « Filler » is the closest thing I’ll never have to a religious experience. Pure power and adrenaline. »

Extrait: « I was used to ordering a couple of records at a time directly from my favorite record labels – Subterranean, Dichord and B.Y.O. But one day, the Reverend Fucking Mike Anarchy brought to school a fat, yellow Toxic Shock catalog. My friends and I gathered around a desk oohing and aahing over the massive selection of old favorites and potential new favorites. (…) I volunteered to take the money home and have my mom write a check. Naturally my mom wanted to know exactly what the hell « Toxic Shock » was and what the hell she was writing a check for. I didn’t want it to come to this, but sheepishly showed her the list of records that my friends and I picked out. We selected such classics as: Dayglo Abortions, Discharge, Hagar the Womb, Motörhead, Scared Straight, Justice League, Anti-Scrunti Faction, Roach Motel, Sewer Zombies, Blood Farmers, Permanent Scar, and, of course, Pillsbury Hardcore. I will never forget the uneasy look on my mother’s face as she read the list. As she reached for her checkbook, she said, « You’re a nice boy, Bobby. I hope this music doesn’t change you. » Of course, the music did change me. I think it made me a better, stronger, funnier, more critical person and it has given me some of the greatest moments of my life. And I still think I am a nice boy. »