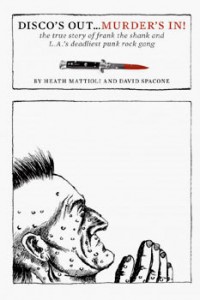 Extrait: « Having your head shaved was really asking for it. This was not an easy time for social acceptance. The whole human race still wore its hair long in 1979. Whether you were a rocker, biker, hippie, burnout, surfer, skateboarder, lowrider, disco beaner, fob, or even a standard black guy into kung fu, you were not happy having a few freaks around you with shaved heads. All gave punk rockers some kind of shit. We were outcasts from that moment on. The four of us quietly sat for a moment, staring at each other with our quarter-inch haire standing on end, taking in all the possible consequences. Mikey looked over to Gary and passively asked, « are we really punkers now? » After cutting my hair that day, I returned home and stared in the mirror. For the first time I actually saw someone I liked. The toughest lesson I learned as a punk rocker would be the most common in my crowd for years to come. My drunken father took one look at me, his eyes on fire, and hurled a freshly cracked beer right at my skull. I lost my balance trying to protect my face as the beer hit me square in the shoulder. »

Extrait: « LMP gang already had multiple parts to it. One crew in my home city of La Mirada, one in Whittier, and one in Norwalk. All were causing chaos in the scene independently, but still functioned as one gang when need be. Each city was geographically hooked together. Each clique had 20-25 members per city. The numbers were about to grow to 40-50 in La Mirada and Witthier. A new chapter in the city of La Habra was getting underway with about 20 members. The norwalk clique stayed small, tigh-knit and lethal. LMP also forged stronger ties with LADS. No single gang in the scene could stop us. Everybody had to shut up and take it. »

Extrait: « As a freshman in high school, your first year was supposed to be wrought with terror from upperclassmen, but not me. Jocks and hippies populated the campus, but LMP came with a threat-filled edge. People knew I ran with crazies. They knew I was in a gang. The veteran LMPs who had already passed through this institutional joke either dropped out or got kicked out. We established a reputation of resistance. (…) In La Mirada our activity was sporadic, not too sensational. Youngblood and I were getting busted around our neighborhood for little stuff – vandalism, truancy, and curfew. A bunch of posers from OC started a new gang bent on instant status. They called themselves DYG, which stood for Destructive Youth Gang. Members were 11th and 12th graders from surrounding cities behind the Orange Curtain. A proper punk rocker from one of their high schools informed us that only a year earlier, the guys were all punk-music-hating jocks and preppies. They were now punk rock gangsters. DYG spray-painted their name everywhere we congregated, crossed out LMP, and proclaimed they would destroy La Mirada. »

Extrait: « Holiday season rolled around, ushering il all kinds of ill will. I refused for the last four years to participate in any kind of Christmas activity. The way I saw it, punks didn’t do such things. Christmas meant sitting around with stupid relatives and listening to boring stories before you opened up some lame present you had no use for. Screw that. When Mom got around to decorating the tree on her day off, my indifference for the holidays peaked. Mom needed help topping the tree since she wasn’t that tall. Putting the angel on top was considered a privilege, according to family tradition. Fuck tradition. Instead I took my rare prized 8×10 framed photograph of Sid Vicious and placed it above. Mom called it sacrilegious, but left it up there to make me happy. »

Extrait: « If you ain’t with us you’re against us. My private world was punk rock gangland, with a proliferation of new crews, along with old ones, that wanted to take a shot. Punk gangs randomly threw parties in their turf with bands, booze and a basic invitation to come over…if you dare. Tonight’s hosts were SGP South Gate Punks and Circle One. They somehow conjured up enough balls to have an event deep in our territory’s warehouse district with Corpus Delicti playing, four worthless local bands, a keg and a slam pit. Who the fuck do they think they are ? We found out late in the day and only managed to put together a bare-bones war party with nine representatives. We arrived simultaneously, in a show of force. Inside the warehouse, punks were collecting in clusters to protect themselves. Others surrounded what was left of a keg. When Corpus Delicti hit their first note, the whole place pivoted toward the band like coyotes at sundown – they wanted their blood. Roughly 15 South Gate Punks and about 20 from Circle One, scrutinized our every move. Regardless, LMP took possession of their pit – bashing, knocking down SGP and Circle One members slam dancing in the trenches. You could bet that the hundred additional partygoers felt something brewing between us. It was obvious we weren’t there for the music. »

Extrait: « Mongo was a very, very, very scary punk. Even though he permanently wore comical smiles that said it was okay to approach, natural impulse told you stay away, or better yet, run. He wasn’t up to date as far as the look happening at the start of 1984. Mongo still wore clothes of 1980, whreas most of us in LMP were doing more personalized tweaks with our look. L.A area punks in general were either doing the british street thing or a hodgepodge of the cholo, Pendleton, plaid, bandana and tapered Dickies vibe. Others wore the skate, surf punk, wino, Vans look. Suburban, beach, and inner-city youth had all established their own identities by way of style. Mongo was no-frills when I found him wandering Frontier High in jeans, engineer boots and droopy Mohawk. »

Extrait: « A small issue arose toward the close of 1984. One of the pretty well-known white-supremacist skinhead gangs was eagerly trying to recruit LMP from many angles. Their higher-ups knew we put death down on the big board. Politics now came into play. Santino and I had to confer with the Godfather and handle this gently. All of us understood the level of respect to which we would climb in prison and on the streets if we had them as an umbrella. But we weren’t that kind of crew; besides, LMP was mixed-race. Our values were botom-line hardcore punk. A conscious all-out refusal of conventional society – violence was the calling card. Racism and establishing a criminal network for profit wasn’t part of the plan. We weren’t interested. »