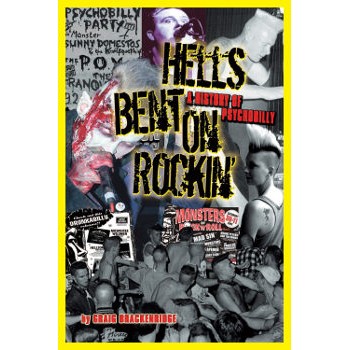 HELL’S BENT ON ROCKIN’ (A HISTORY OF PSYCHOBILLY)

As the bastard genre of Rock ‘n’ Roll and the forgotten offspring of Punk, a history of Psychobilly is long overdue. Despite being starved of the oxygen of mainstream music press attention for over 25 years, Psychobilly has thrived in the underground building a network of fiercely loyal followers and produced a huge number of bands who each peddle their own brand of the genre.

The book follows the scene from its initial boom in the early 1980’s, through the lean years of the late 1990’s to the current ‘Psychobilly Renaissance’ of the 21st Century where the genre looks dangerously close to crossing over into the mainstream alternative scene, particularly in America where Psychobilly has experienced a recent rebirth on a very large scale which has ironically attracted a new generation of UK and European fans.

The book explores the roots of Psychobilly, not only in Rockabilly and Punk but also in 1960’s Garage Punk, Glam Rock, revival Rock ‘n’ Roll and Heavy Metal. It focuses on key pioneers of the scene such as The Meteors, Guana Batz, King Kurt, The Krewmen, Frenzy and Demented Are Go then looks in detail at the bands which followed in their wake all across the UK, Ireland and Western Europe.

As followers of Psychobilly are intensely loyal and as much a part of the scene as the bands, the book also includes first hand testimonials from a number of music fans detailing how they first became hooked by the Psychobilly bug. The book also focuses on the key record labels, promoters, fanzines and websites which are an integral part of the genre.

This book covers the careers and key releases from hundreds of Psychobilly bands across the globe including more far flung regions where the Psychobilly disease has spread such as Japan, Russia, Australia, Mexico and South America. It also details the fashion, haircuts and tattoos which give Psychobilly its style and looks at a variety of related music genres such as Neo-Rockabilly, Trash, Garage punk and Speedrock.