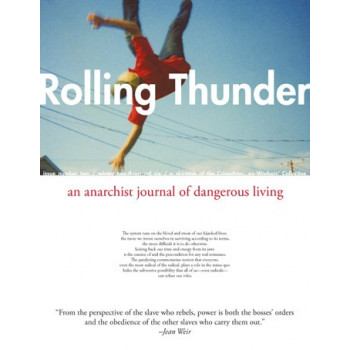 Rolling Thunder is a biannual journal by CrimeThnic ex-workers’ Collective, focusing on passionate living and creative resistance in all the forms they take. “It is our attempt to offer a wild-eyed, fire-breathing, militant periodical that can cover the adventures of a dissident high school student skipping class as easily as a street riot that sets an embassy aflame: that neither reduces the organic impulses of revolt to inert theory nor prioritizes conventional activism over the subversive elements present in every other walk of life but instead focuses on sharing the stories of those who step out of line and sharing the skills developed in the process (not to mention the poetry) so that many more may do so and do so more boldly and so that liberty and community and all those other beautiful things may triumph.The lengthiest articles in our second issue are an analysis of last summer’s protests against the G8 meeting in Scotland, a retrospective on squatting and resistance culture in northern Europe, and an in-depth discussion of subcultural marginality and refusal that is to dropping out what the first issue’s sixteen-page feature article was to protest activism. The last of these is rounded out by an inside report on the workings of current labor unions, a memoir of gender mutiny, and an account of how to establish a squatted community center; other highlights include an intimate reflection on the patterns by which abusive relationships perpetuate themselves and a primer on communications technology for direct action. This issue also features plenty of the unorthodox fare that distinguishes CrimethInc. projects from the sometimes listless work of other radicals: a haunting fairy tale, cutting edge games to play between more serious adventures, a crossword puzzle, and sheet music for a classic blues song about the preponderance of bread products in the dumpsterer’s diet.