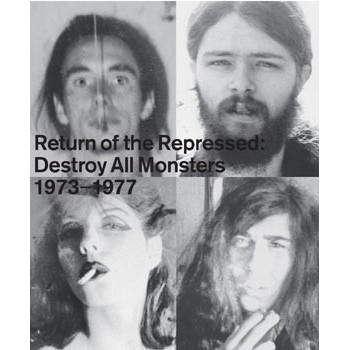 The influential Detroit "anti-rock" group Destroy All Monsters (Mike Kelley, Cary Loren, Niagara, Jim Shaw) made raucous music, irreverent art and legendary zines, performing and disseminating their activities through an elaborate self-mythology. The Destroy All Monsters zines have been reprinted in facsimile editions, but the art objects made by the members have never been examined as independent works. Return of the Repressed: Destroy All Monsters 1973-1977 is the first retrospective of the artwork itself, as well as a DAM overview. Produced in collaboration with the artists, it collects the work of the collective between circa 1973-1977, almost all of which is previously unpublished. Included are dozens of candid photographs of the group and their environs by DAM member Carey Loren, which serve as both documents of a proto-punk group at its height and snapshots of the collective's often hilarious attempts to construct identities as characters in the larger Destroy All Monsters mythology; early prints and drawings by Jim Shaw that show the seeds of his later work, and remain powerful images; a voluminous quantity of drawings and etching by Mike Kelley, often of monsters and political personalities, that indicate the artist's anarchic roots; and hitherto unseen drawings and prints by Niagara that show the heady imagination and sure-footed line that would continue to serve her well. Return of the Repressed leaves off just as DAM shifted into the now legendary rock band with Niagara at the helm.