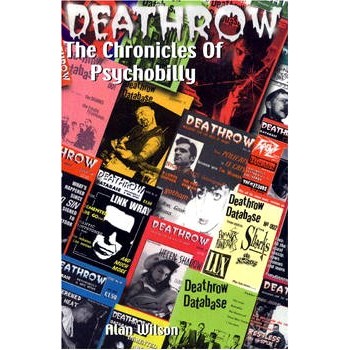 DEATHROW - THE CHRONICLES OF PSYCHOBILLY

Deathrow was the worlds only long running psychobilly fanzine and this book is a collection of all the rare and collectable original issues. The zine soon became a properly printed magazine with a circulation in excess of 5000 copies per issue. Packed with articles on bands such as The Meteors, The Frantic Flintstones, The Sharks, Frenzy, Batmobile, Demented Are Go and many more, all harvested from the highly collectable cult music fanzine ‘Deathrow’. A valuable reference of events, bands, and stories for those too young to have experienced the European Psychobilly scene in it’s heyday and a nostalgic reminder for those who were a part of it…. and survived!