> LIVRES + ZINES>ART+CONTRECULTURE>CINEMA DE GENRE>CHAIN SAW CONFIDENTIAL: HOW WE MADE THE WORLD'S MOST NOTORIOUS HORROR MOVIE 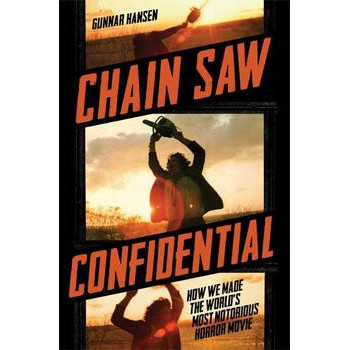 
CHAIN SAW CONFIDENTIAL: HOW WE MADE THE WORLD'S MOST NOTORIOUS HORROR MOVIE

When The Texas Chain Saw Massacre first hit movie screens in 1974 it was both reviled and championed. To critics, it was either "a degrading, senseless misuse of film and time" or "an intelligent, absorbing and deeply disturbing horror film." However it was an immediate hit with audiences. Banned and celebrated, showcased at the Cannes film festival and included in the New York MoMA's collection, it has now come to be recognized widely as one of the greatest horror movies of all time.
A six-foot-four poet fresh out of grad school with limited acting experience, Gunnar Hansen played the masked, chain-saw-wielding Leatherface. His terrifying portrayal and the inventive work of the cast and crew would give the film the authentic power of nightmare, even while the gritty, grueling, and often dangerous independent production would test everyone involved, and lay the foundations for myths surrounding the film that endure even today.
Critically-acclaimed author Hansen here tells the real story of the making of the film, its release, and reception, offering unknown behind-the-scenes details, a harrowingly entertaining account of the adventures of low-budget filmmaking, illuminating insights on the film's enduring and influential place in the horror genre and our culture, and a thoughtful meditation on why we love to be scared in the first place.
Gunnar Hansen is the author of several books of history, travel, and poetry. He lives on the coast of Maine, also he was a scary ass chainsaw weilding motherfucker named Leatherface in the classic horror film The Texas Chainsaw Massacre.