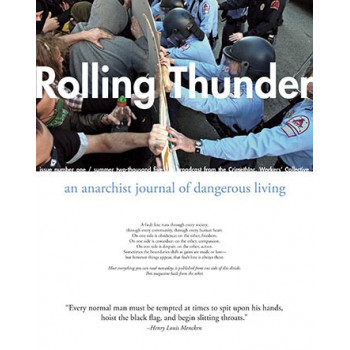 Rolling Thunder is a biannual journal by CrimeThinc ex-workers’ Collective, focusing on passionate living and creative resistance in all the forms they take. “It is our attempt to offer a wild-eyed, fire-breathing, militant periodical that can cover the adventures of a dissident high school student skipping class as easily as a street riot that sets an embassy aflame: that neither reduces the organic impulses of revolt to inert theory nor prioritizes conventional activism over the subversive elements present in every other walk of life but instead focuses on sharing the stories of those who step out of line and sharing the skills developed in the process (not to mention the poetry) so that many more may do so and do so more boldly and so that liberty and community and all those other beautiful things may triumph.The debut issue includes an extensive analysis of the preceding decade of direct action, feature articles on consent in sexual relationships and alternative conceptions of education, and testimonials from maniacs who squatted their own workplaces and set themselves on fire while fighting police… and that’s just the beginning! All told, this is 116 pages of radical commentary, history, poetry, artwork, fiction, parlor games (!), comics (!!), skills (e.g., “how to survive a police raid”), and culinary advice, all with an emphasis on personal narratives and celebrating the ways subversion thrives in the most unlikely places.