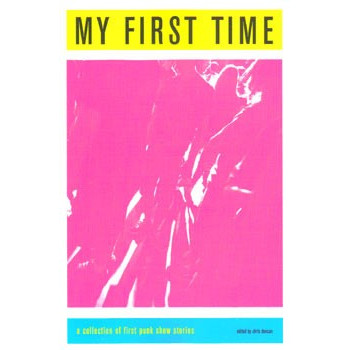 MY FIRST TIME: A COLLECTION OF FIRST PUNK SHOW STORIES

Everyone remembers their first punk show... The punk movement has permanently altered youth culture. Today's art, politics, and aesthetics wouldn't be the same without the hundreds of thousands of young people who have embraced punk over the last 30-odd years. What does each of these recruits have in common?

They all remember their first time. Hear what it was like straight from the fanatics. Whether it was Jawbreaker in Berkeley; Sick of it All in DC; The Dead Kennedys in Berkeley; The Dickies at CBGB's; Gang Green in Boston; the Ramones in Milwaukee; The Circle Jerks in the West Village or Baltimore; Neurosis at Gilman Street; The Decline of Western Civilization in Venice; Fugazi in Chapel Hill; 7 Seconds in Sparks, NV; or their goofy friends at a party, these fans recount the inspiration, the embarrassment, and the redemption of their first time. Michelle Tea, Michael Azerrad, Blake Schwarzenbach, Blag Dahlia, Russ Rankin, Shawna Kenney, Anna Brown, and many more.