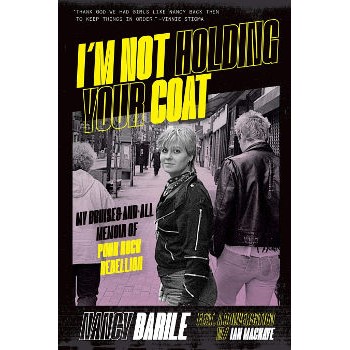 
I’M NOT HOLDING YOUR COAT

My Bruises-and-All Memoir of Punk Rock Rebellion. From disenchanted Catholic schoolgirl and glam maniac to instigator on the 1980s hardcore punk scene, Nancy Barile discovered freedom at a time when punk music was new and dangerous. She made her place behind the boards and right in the front row as insurgents such as SSD, Minor Threat, Bad Brains, Dead Kennedys and Black Flag wrote new rules and made history. She survived punk riots and urban decay, ran the streets with outcasts, and ultimately found true love as she fought for fairness and found her purpose.

"I awaited Nov. 20 with great anticipation. Not only would I see powerhouses SSD and Minor Threat play live again, but I’d also get to watch my buddies John Watson singing and Vinnie Stigma playing guitar with their young band Agnostic Front. And I'd be treated to seeing my local pals Crib Death and Flag of Democracy. The day of the show, Al picked me up in his black van. About 11 members of the Boston Crew were already crammed into the back. I was happy to reconnect with everyone again and to make some new friends from Boston. After the 7 hour drive, the Crew was ready to have some fun. When we arrived at the venue, I jumped right out of the van to find out where to unload the band's equipment. Ian MacKaye from Minor Threat appeared in the driver's side window and started talking to Al. Suddenly a station wagon came careening down the street. The driver had long dreadlocks & a crazed look in his eyes. One instant later, the wagon plowed headfirst into the SSD van, clipping Ian—who was smart enough to grab the top of the van and jump—and tossing him into the air. The driver did not stop, but continued his rampage down the street and out of sight."