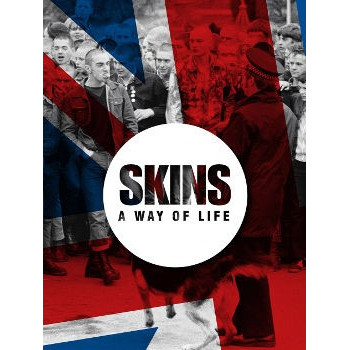 SKINS : A WAY OF LIFE

1969 is happening again... Number two all over. Ben Sherman shirt. Braces. Doc Martens. Harrington jacket. Trojan records. Ska music. Tattoos. Pints. Pubs. Football. Respect. Working class pride. The true skins have never gone away.
Skinhead is the only British style tribe that still genuinely scares people. From the dancehalls to the football terraces, from the local pub to the tower blocks working class teens in the late 1960's found their own form of rebellion. It didn't come from Soho. You couldn't buy it on Carnaby Street. They looked the long haired revolution in the eye and realised that it held nothing for them. SKINS: a way of life is a beautiful hardcover collection of photographs of skinhead culture from the late 1960's throughout the 1980's. Many of these images have never been published before. Presented with a series of articles, commentary and quotations designed to celebrate the essence of the skinhead cult, without glossing over the darker side of the story. Live the spirit of 69.

« The Skins were thrice damned in this sense because their culture tried to break away from traditional working class submissiveness, and at the same time totally refuse the trappings of the new, trendy middle class culture. Just like many rappers today, they were caught between two forces – the want for finer things and a more exciting life, and the need to stay authentic to their roots. To become a Skin was to aggravate and increase the problems of your real life, to welcome the discrimination and fear of other people. In a sense, they embraced their marginalisation and amplified it – making their oppression doubly visible. Hated by all factions of the middle class they were crucified by the media. »