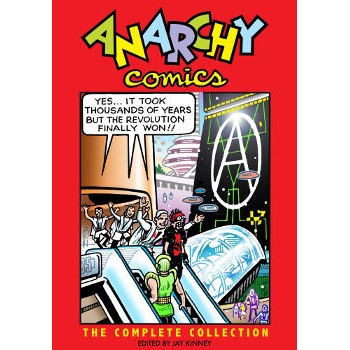 Anarchy Comics: The Complete Collection brings together the legendary four issues of Anarchy Comics (1978-1986), the underground comic that melded anarchist politics with a punk sensibility, producing a riveting mix of satire, revolt, and artistic experimentation. This international anthology collects the comic stories of all thirty contributors from the U.S., Great Britain, France, Germany, Netherlands, Spain, and Canada.

In addition to the complete issues of Anarchy Comics, the anthology features previously unpublished work by Jay Kinney and Sharon Rudahl, along with a detailed introduction by Kinney, which traces the history of the comic he founded and provides entertaining anecdotes about the process of herding an international crowd of anarchistic cats.