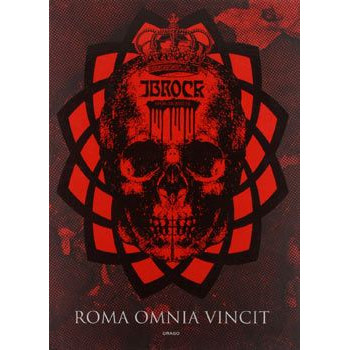 ROMA OMNIA VINCIT is the first book from Roman street artists JB Rock and Diamond. It has been done in a flip over style with two covers, on one side Diamond, on the other JB Rock. They are friends and collaborators and they work both together and alone. Each artist has his own technique, style, and perspective, however their work on the street often parallels the other. Their work is a true reflection of their street art attitude, which can be seen in their style and dedication to their work and designs. The process of creation can be followed from conception in the studio to the adhesion to the walls, which passes through the realization of the poster and stencil techniques. This leads to the meanderings of Street Art, not only a mere practice but also in its execution. The two artists and their two different approaches lead to questioning the values and the differences between exposition in a gallery and position on the street. The book, in its flip over style can be read from either direction, front to back it focuses on the work of one artists and from back to front on the work of the other. In the middle the works are fused together in critical texts that explain and contextualize this movement in an amplified vision that comprehends the landscape of contemporary art. Their art nouveau inspiration, mixed with decorative icons and rugged style, often comprised of exquisitely tattooed ladies who have been transported to a 1920s beauty pageant or transformed into Ancient Roman icons that recall the history of the Eternal City.