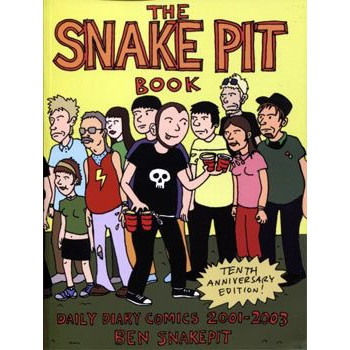 Ben White (aka ben Snakepit) draws his life everyday in 3 comic panels. This was his first book, collecting quite a few various zines. After describing dozens of various Snakepit titles I'm going to defer to the wisdom of Jimmi Payne's Punk Zine, "Taken individually, each strip resembles what a friend would say if you asked what they had done that day. Ben sifts through the minutiae of life as well as the full experience of time in a day. This is different than James Kochalka's work as there is no pretense at narrative or point. The narratives in Snakepit open up on the macro level. If Snakepit is to be read on the toilet, a mere bowel movement is enough time to live months through the protagonist's eyes. Patterns emerge and story arcs materialize and years of common actions load into a highly concentrated snapshot that wakes you up to the ongoing machinations of life beyond your present day. This has led many to label Snakepit an existential text."
This is the tenth anniversary edition!! Introduction about doing cocaine by Aaron Cometbus.