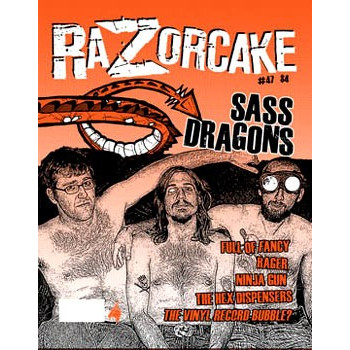 Classic punkrocknroll fanzine from Los Angeles. In this issue (December 2008): Sass Dragons: Interview by Megan Pants. Dudes who wake up next to dudes. They sound like if The Ergs! were more into the Dwarves and had less shame. In conclusion, it’s really awesome drumstick up the butt rock. Full Of Fancy: Interview by Joe Evans III. Apparently, you end up writing really catchy pop punk fused with ‘90s alternative/grunge when all you do is sit around watching Indiana Jones movies. Rager: Interview by Stevie Greco. Richmond punk/hardcore by way of Chicago. Ninja Gun: Interview by Matt Walker. These ain’t just your average farmers; they also play some great indie/punk/country, in addition to killing pigs. Hex Dispensers: Interview by Ben Snakepit. The latest in evil garage punk rock’n’roll bands out of Austin. More evil than a Zagnut (whatever the fuck that is).