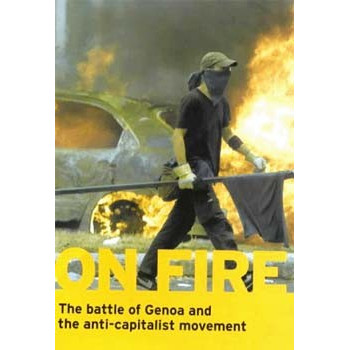 ON FIRE - THE BATTLE OF GENOA AND THE ANTICAPITALIST MOVEMENT

The millitant response of some sections of the anti G8 protest in Genoa in July 2001. Written to give you an insight into the ideas, thoughts and actions behind the confrontational approach of these millitants. The aim is to encourage debate about tactics and empower us to take on those who currently are ruling this world. Eyewitness accounts and analysis from the militant sections of the anti-G8 demonstrations in Genoa in July 2001. There are some big names here (Negri and Hardt, Starhawk, Massimo de Angelis), but its the eyewitness reportage and unsparing dissection of those events from the anonymous heroes which make this such an engaging, thought-provoking, and inspiring document...not to mention a vital piece of our history. This collection of articles offers a unique insight into the ideas and actions behind the confrontational approach of these militants. We are not victims, we are not sheep, we all have the ability to be active participants in our own destinies.