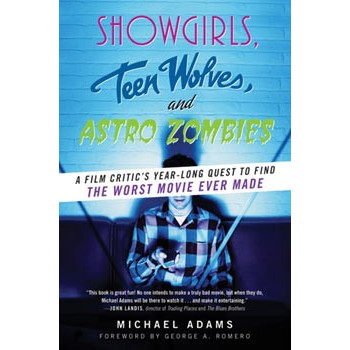 Showgirls or Spice World? Reefer Madness or Robot Monster? Battlefield Earth or The Black Gestapo? One reviewer's relentless search for the most appalling abomination ever to disgrace the screen?at the rate of one movie a day... for a year! For every cinematic classic the studios have released, there have been dozens of cheesy monstrosities, overpriced flops, and schlocky epics. Rampaging robots, bouncing bimbos, moronic martial artists, vapid vampires, troubled teens, barbaric bikers, and idiotic infants -- all of these, and more, have been foisted on us in the name of entertainment." Featuring a cast of thousands, including A-listers like Brad Pitt and Sandra Bullock in their Z-grade origins, and firsthand interviews with bad-movie aficionados, from Leonard Maltin and David Sedaris to John Waters and Eli Roth, this odyssey charts one intrepid critic's attempt to maintain a normal family life and two day jobs as he watches hundreds of dreadful tapes and DVDs in every conceivable genre. Foreword by George A. Romero. No pictures. ""Michael Adams' book is great fun! No one intends to make a truly bad movie, but when they do, Michael Adams will be there to watch it... and make it entertaining." -John Landis. "Reading Michael Adams' entertaining and disturbingly comprehensive book is like being dragged through the fun parts of Hell in a flame-proof suit." -Kevin Murphy, co-star/writer of Mystery Science Theater 3000 and author of A Year At the Movies. ""Addictive, mesmerizing and endlessly amusing. -Harry Medved, co-author of The Golden Turkey Awards and The Fifty Worst Films of All Time.