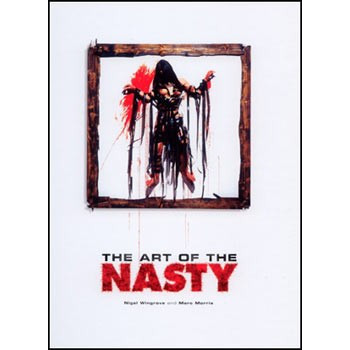 THE ART OF THE NASTY

The most comprehensive collection of video nasty and pre-certificate video sleeves ever reproduced in one volume. In the early 1980s, video was a new technology that allowed people the freedom to view films in the privacy of their own homes. It was also a technology forever stigmatised by its association with the video nasty. The Art of the Nasty explains and conveys the media furor, fear, and the rush for political legislation that greeted the arrival of uncensored horror films on video in the UK. The hysteria was generated and fuelled as much by the sleeves and marketing as by the films themselves. In fact, many of the biggest critics of the nasties only ever saw the sleeves. Some of the early video sleeves are indeed an unbelievably over-the-top mixture of outrageous graphics and in-your-face visual shock tactics, guaranteed to offend. The nasty sleeves were to sow the seeds of their own destruction. Banned by an Act of Parliament after a frenzied and hysterical press campaign, the video nasty was deemed at the time to be a threat to society as we know it, even being directly implicated as a catalyst for murder. The Art of the Nasty reproduces almost 400 pre-certificate video covers in all their lurid glory. From the ludicrous and extreme imagery of SS Experiment Camp and the gross savagery of Cannibal Holocaust to the powerful and confrontational rape victim used to promote I Spit On Your Grave. An invaluable visual record of a time the mainstream video industry would like to forget.