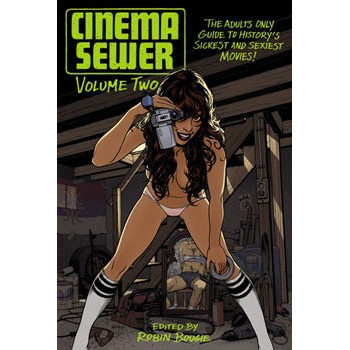 The celebrated underground smash that is Cinema Sewer the magazine has been transformed and mutated into Cinema Sewer: The Book - and following the runaway success of the first volume, Volume 2 has been unleashed onto a now slightly-less-unsuspecting world! A mind-melting compilation of gonzo writing, illustration and comics about the most insane, sexy, awkward, cheesy, hilarious, upsetting and jaw-dropping movies in the history of film, Cinema Sewer joyously celebrates the sleaziest aspects of the moviegoing experience, whilst delving deep into bizarre cinematic history. Author and comic artist Robin Bougie takes a dive to the bottom of the cesspool of sexploitation, doing so in a distinctive manner that has made him famous amongst a loyal following of cult film fans. Issues 13 to 17 of this celebrated underground smash magazine are exhaustively revised and collated in this second wild volume, together with an additional 90 pages of never-before-seen interviews, rants, comics, hard-to-find classic movie advertising, and graphic illustrations by Bougie and a host of his talented friends from both the comic book and animation industry. Regardless of whether the reader is just discovering the world of classic porn, horror, and exploitation movies, or if they're a long time fan from the days when the drive-ins and grindhouses reigned, they'll find plenty to get excited about, gleefully sloshing around in the filth of the Cinema Sewer! Black and white. Lots of adult material; not for kids.