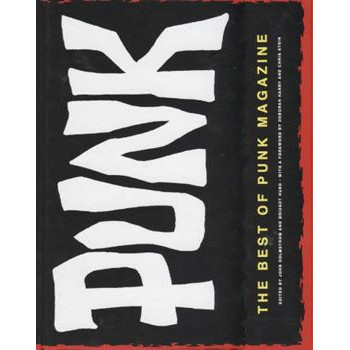 THE BEST OF PUNK MAGAZINE

Launched in 1976, Punk magazine announced an exploding youth movement, a new direction in American counterculture. Punk was to magazines what the stage at CBGB was to music: the gritty, live-wired, throbbing center of the punk universe. Despite its low-rent origins, the mag was an overnight success in the underground music scene, selling out every print run across the US and UK. Every musician who appeared on the cover of Punk became an icon of the era. But Punk not only championed music, it became a launching pad for writers, artists, cartoonists, and graphic designers. And the wacky, sardonic, slapstick vibe of the magazine resonated with an international army of music fanatics who were ready to burn their bell bottoms and stage-dive into the punk universe.
Interviews with the Ramones, Sex Pistols, John Cale and Brian Eno; Photos by Roberta Bayley David Godlis, and Bob Gruen; Cartoons by R. Crumb, Bobby London, and John Holmstrom; The articles that formed the groundwork for Please Kill Me, the legendary oral history of punk by Legs McNeil and Gillian McCain; Two "graphic novels"—The Legend of Nick Detroit and Mutant Monster Beach Party—told through photographs featuring Debbie Harry, Joey Ramone, Richard Hell, Andy Warhol, Peter Wolf, and David Johansen