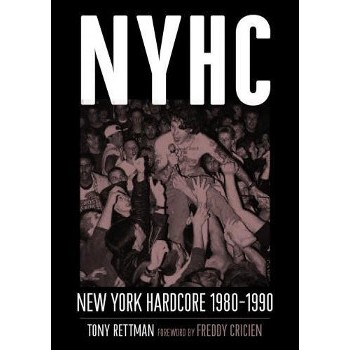 With a foreword by Freddy Cricien of Madball, who made his stage debut with Agnostic Front at age 7, NYHC slams the pavement with savage tales of larger-than-life characters and unlikely feats of willpower. The gripping and sometimes hilarious narrative is woven together like the fabric of New York itself from over 100 original interviews with members of the key bands of the era of New York Hardcore.

Vinnie Stigma:"I was at Harley Flanagan's twelfth birthday party. He was so small that he had to stand up to play the drums, because his foot couldn't reach the pedal. His twelfth birthday I'll never forget. Ichased him around the bar of Max's all night long, because I'm a fun guy. He was twelve years old. He was a baby!