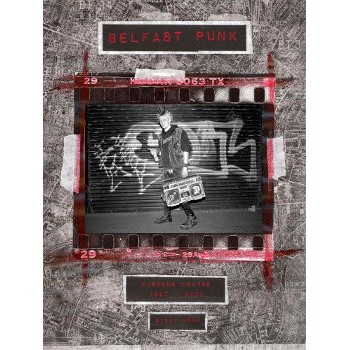 The "Warzone Collective" formed in the Northern Ireland city of Belfast in 1984, when a few local punks decided to secure their own venue. In 1986, the Collective opened Giros, with a vegetarian cafe, a practice space and screenprinting facilities. In 1991, Giros moved into a larger, more ambitious venue, where photographer Ricky Adam (born 1974) captured the photographs in Belfast Punk. Bands from all over the world came to play at what quickly distinguished itself as one of the most credible punk venues in Europe, including Bastard Youth, Knifed, The Dagda, My Name is Satan, Submission Hold, Debt, Runnin' Riot, Sawn Off, Devils, Doom, The Redneck Manifesto, The Sorts, The Farewell Bend, John Holmes, Starmarket and The Dickies. Ricky Adam's candid black-and-white photos capture the counter-cultural energy of the Belfast punk scene at the Warzone Centre.