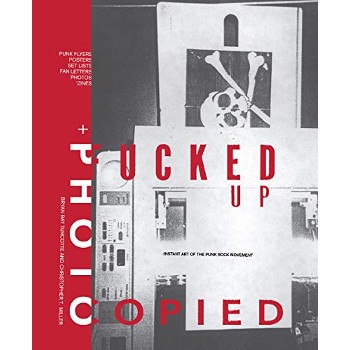 FUCKED UP + PHOTOCOPIED: THE INSTANT ART OF THE PUNK ROCK MOVEMENT

Raw, brazen and totally intense, Fucked Up + Photocopied is a collection of frenetic flyers produced for the American punk scene between 1977 and 1985. Many were created by the musicians themselves and demonstrate the emphasis within the punk scene on individuality and the manic urge of its members to create things new.Images were compiled out of whatever material could be found, often photocopied and, still warm, stapled to the nearest telephone pole to warn the world about next week's gig. One glance and you can sense the fury of live performances by bands such as Black Flag, the Dead Kennedys and The Minutemen, and, through the subtext the reader is exposed to the psyche of a generation of musicians stripped bare: The Germs, J.F.A, NOFX, X, The Circle Jerks, Devo, The Exploited, The Screamers, The Cramps, The Dils, The Avengers and more. 20th anniversary edition.