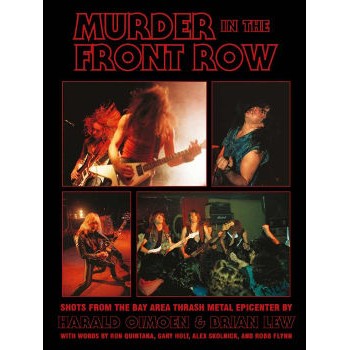 MURDER IN THE FRONT ROW

Shots From the Bay Area Thrash Metal Epicenter. During the early 1980s, San Francisco’s small community of dedicated headbangers scorned image and instead risked life and limb in search of the ultimate in musical thrills. Locals Exodus and Los Angeles transplants Metallica reigned in small clubs like the Old Waldorf, The Stone, and the infamous East Bay bastion of heaviness, Ruthie’s Inn. Thrash metal upstarts Slayer and Megadeth found a second home in the Bay Area, while a homegrown breed of tempo-crazed teenagers like Legacy, Possessed, Death Angel, Heathen, and Vio-lence brought Bay Area thrash metal to critical mass.

Photographers Harald Oimoen and Brian Lew were dodging bodies from the very start, in front of the stage, backstage, and on the stage itself. They captured the public victories and private parties of a scene where fans and musical idols were equally hellbent on faster, heavier music and endless outrageous fun. Oimoen and Lew fought on the frontline of a war for individuality, snapping frame by frame as thrash metal was born, along with stagediving, crowd-walking, and countless other magical moments filled with key local personalities. Somewhere along the way, Oimoen and Lew’s friends in Metallica, Slayer, and Megadeth became legends.