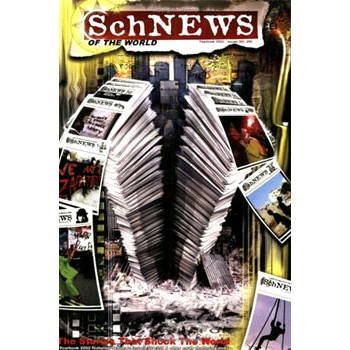 Schnews Issues 301-350 (April 2001 - April 2002)These issues are published in the book 'SchNEWS Of The World': The temperature goes up a few notches as the earth's climate has its hottest year on record - and the corporate carve-up lifts its tempo in the paranoia and madness of September 11th. Behind the haze Argentina goes into meltdown. Israel reoccupies Palestine causing a second Intifada. Hundreds of thousands come out on the street in Genoa, Quebec, Gothenburg, Barcelona, Brussels against globalised institutions. Even larger numbers fight for their land and livelihood against neo-liberalism in South Africa, India, South America and the rest of the global south.These 50 issues plus 200 other pages of articles, cartoons, photos, graphics, satire, and a comprehensive contact database are all together in...SchNEWS Of The World .