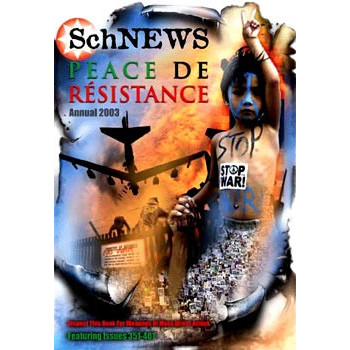 Schnews Issues 351-401 (April 2002 - April 2003)These issues are published in the book 'Peace de Resistance': 'As the Forces of Darkness gather for a new attack on Iraq, they're shaken by an unexpected explosion of resistance. US airbases are invaded; military convoys are blockaded; schoolkids stage mass walkouts from Manchester to Melbourne; roads are occupied, embassies besieged, and cities all over the world are brought to a standstill by the biggest mass demonstrations ever seen. Read about the efforts to sabotage the war machine that the corporate media ignored: not just the mass demos, but Tornado-trashing in Scotland, riots across the Middle East, and train blockades in Europe. Featuring SchNEWS 351-401, this book also covers many of the past year's other stories from the rebel frontlines, including GM crop-trashing, international activists in Palestine, and the 10th anniversary of Castlemorton. All that plus loads of new articles, photos, cartoons, subverts, satire, a comprehensive contacts list, and more…'PLUS INCLUDES FREE CD-ROM by BEYOND TV featuring footage of many of the actions reported in the book, satire plus other digital resources