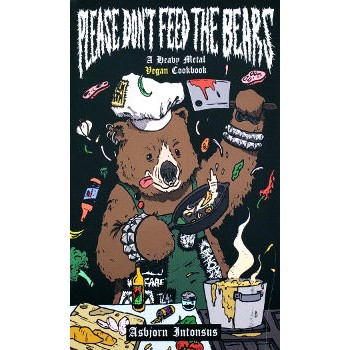 Learn to cook a range of brutally tasty yet simple plant-based dishes, accompanied by heavy metal and punk lyrics, art, and ethos. This vegan cookbook is jam packed with recipes for stews, soups, sauces, noodle & bean dishes, baked entrees, and desserts, interspersed with illustrations of adorable armed animals, meditations on suicide, a crossword puzzle, and instructions for DIY tattoo guns. Expand your cooking repertoire with recipes from around the world, including Grizzly Bear Gnocchi, Taco Thrash-erole, Misery Wot, Gotterdamerung Dopple-Chocolate Cookies, and Hair of an Angel Knotted by the Persistance of a Mortal. Each recipe is paired with a metal song to listen to while you cook.

Based on a series of long-obscure 1990s zines, this underground classic is now in its third edition, bringing you practical, animal-free cooking skills that will soothe your justified despair at the bloodthirstiness and futility of human nature. First published in 2006. New edition.