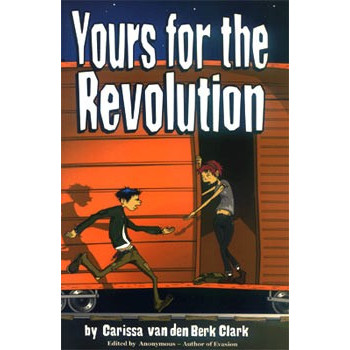 YOURS FOR THE REVOLUTION

Set in the near future, the U.S. Government and the corporate media conspire to turn the public against progressive social change through an aggressive campaign of misinformation, and manipulation, under the guise of a perpetual war on terrorism. Through much adversity, a group of individuals forge an entirely new path for themselves. With nothing to lose, 15 year old Penelope and her best friend Eugene, hit the road and embark on an adventure. Along the way they encounter an extraordinary woman named Liberty who invites them to become part of a movement dedicated to organizing workers, and changing society for the better.

Van den berk Clark has published Screams From Inside fanzine since 1992, comprised mostly of personal stories, fiction, music and politics. A regular columnist for HeartattaCk, as well as many other underground magazines, she is poised to enter law school and plans to spearhead a unique legal advocacy program that protects the Eighth Amendment rights of prisoners.