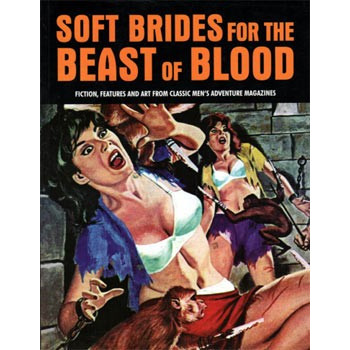 SOFT BRIDES FOR THE BEAST OF BLOOD

Men’s adventure magazines were a form of pulp publishing which flourished in 1950s and 1960s America, pandering to the cruelty and lust of young men with luridly illustrated stories of war, sleaze and savagery. They arose partly in response to the inauguration of the Comics Code in 1954, as a way of circumventing censorship by presenting material in a new, “adults-only” format. The prime years of the men’s adventure magazine unleashed a visual and verbal deluge of exposed and tormented flesh, bloody mayhem and sexual delinquency, representing a unique cultural phenomenon in US publishing and art. Soft Brides for the Beast of Blood is a new anthology which collects some prime examples of text and artwork from a range of men’s adventure magazines published during the prime years of the genre.
Soft Brides for the Beast of Blood is divided into two main sections: "Features" includes a selection of sensationalistic, semi-factual confessions and case histories on such subjects as Nazi doctors, tortures of the Spanish Inquisition, cannibal serial killers, vice, juvenile delinquency and other aberrations; "Fiction" collects numerous examples of garishly illustrated short pulp fiction, with categories including war, white slavery, Nazi horror, jungle savagery, Red menace, Devil worship, torture, sadism and erotic carnage. The book also features numerous examples of interior art from classic men’s magazines, and includes 35 features and stories, with more than 80 illustrations, and 16 pages of full colour, with work by such classic pulp artists as Norm Eastman, Norman Saunders and John Duillo.