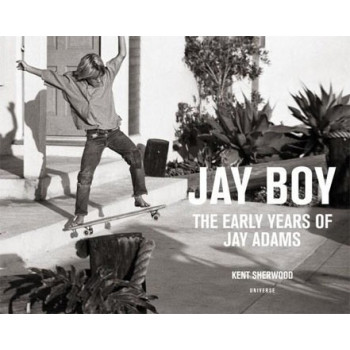 An endearing book of photographs of legendary skateboarding pioneer and Z-Boy Jay Adams during his childhood years, taken by Adams’s stepfather Kent Sherwood and now back in print for the first time since Adams’s passing.
Skateboarding legend Jay Adams’s sudden and unexpected death at the age of fifty-three shocked the world; the broad coverage he received speaks to the immense influence Adams had on the sport of skateboarding and the subsequent culture he helped grow and shape. Universe is pleased to bring back into print the little-known book of photographs of Jay Adams’s earliest days as a surfer and skateboarder, taken by his stepfather Kent Sherwood. Sherwood is directly responsible for unleashing Adams’s talent on the world: he introduced Adams at a very young age to surfing and skateboarding. Sherwood, a self-taught photographer, began shooting the young Jay Adams at play, surfing, and skating with his friends, including Tony Alva, Wentzle Ruml, and Shogo Kubo, among others. Introduction by C.R. Stecyk III, foreword by Tony Alva, essay by Glen E. Friedman.