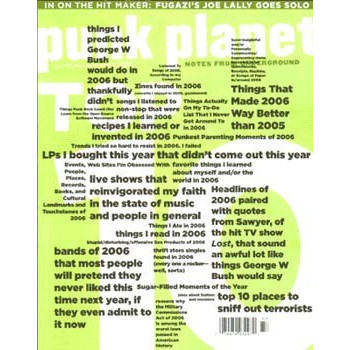 Punk Planet 77 looks back at 2006 with Top 10 lists from all corners of the underground ! The result is a varied collection of dozens of lists ranging from Top 10 shows I regret not going to in 2006, Top 10 things Punk can (re)Learn from the Open Source Software Movement, Top 10 worst things about 2006,Top 10 Punkest Parenting Moments of 2006, and many, many more. With lists from musicians, writers, label owners, comic artists, radio producers, and tons more, these Top 10 lists give a clear look into the psyche of the underground. In addition to more than 20 pages of top 10 lists, Punk Planet 77 also features interviews with Fugazi's JOE LALLY, comic artist DASH SHAW, activist FRIDA BERRIGAN, Sunny Day's JEREMY ENIGK, TARA JANE O'NEIL, and radical archivists the FREEDOM ARCHIVES. Articles in PP77 include a look at SEX WORKER ACTIVISM, about PRIVATIZING PRISON LABOR, and a look at the RADICAL USE OF COPYRIGHTED IMAGES. Plus tons of reviews, columns, DIY and more !