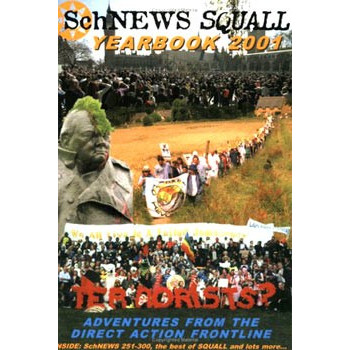 Schnews Issues 251-300 (March 2000 - April 2001)These issues are published in the book 'SchNEWS/Squall Yearbook 2001': The Zapatistas march into Mexico City, thousands disrupt the World Bank meeting in Prague, Churchill gets an anarchist make-over: from Bognor to Bogota, Dudley to Delhi, and Kilburn to Melbourne, resistance has become as global as the institutions of capitalism. This was a year full of stories of people at the frontline of struggles worldwide, and creating sustainable solutions to the corporate carve-up of the planet. These 50 issues of SchNEWS along with the best of Squall magazine, plus loadsa photos, cartoons, satirical graphics, subverts, and a comprehensive contacts database are available together in....